You are here: Home / Thoughts & Musings / Confessions of a firestarter 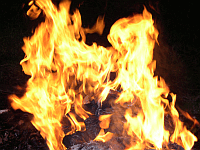 Me and my brother had a fascination with fire when we were young, and both managed to set a house on fire. Steve did the first one when we were about 6 and 4 respectively. One of my earliest memories is of a fireman patiently questioning us both after our Oak Street house was rendered uninhabitable.

The fireman, inspired by a passing ice cream van’s tune, promised to buy us both an ice cream if Steve told him what had happened. I remember being very angry when he kept silent. It later turned out he’d been bouncing up and down on the bed lighting matches and tossing them away.

The second fire was caused by me in the next house, when I was about 9. I used to love lighting the gas under the chip pan or frying pan, which were usually caked in solidified lard. I especially liked to doodle in it with a knife prior to watching it slowly melt under the flame. On this occasion I was multitasking by making myself some toast under the grill whilst writing my name in the lard as it slowly melted. Later I was sat in the room eating my toast when the chip pan caught fire gutting the kitchen. We were thrust out on the front garden in our pyjamas and the fire engines returned.

Staying with fires, I had another go at burning the kitchen down at the next house (we moved a lot) I was about 10. My brother, a friend and I were into conkers. We’d heard that baking a conker toughened them up and made them into champions. So there we were in the kitchen, with a mind to creating some winners. I decided it would be quicker to fry them and popped half a dozen in the frying pan. The frying pan seemed to always be on call, larded up, on the cooker. After the lard melted I was dissatisfied by the fact the conkers were being toughened up only at the bottom as they were only sitting in it and not completely covered. Totally inexperienced in chemical reactions and boiling point temperatures, I was shocked at the spontaneous combustion caused when I topped up the melted fat with water from the kettle. On this occasion we all ran out and took refuge in the woods. When we returned, dad had contained the blaze and no fire engines had been required – however, a thrashing was apparently necessary.

Some months later, whilst at the same house, Steve and me made a nice fire round the back of a local garage in an oil drum one evening. This was in the days when garages often closed at night. We kept it going for ages with anything we could find. Fire is fascinating – and so warm. One of the objects tossed in for good measure was an aerosol can. When it exploded, it was just as I was peering inside, and fortunately, it only blackened me face.

At the next house we had an outside toilet in the back yard and in winter I would light a rolled up newspaper and run out with the flaming torch when I needed “to go”. I kept warm while sat there by feeding the fire with toilet paper. I never had an incident there but it was quite enjoyable.

One November I was down in the cellar with a friend when we decided to set off some fireworks we’d got our hands on by doing the penny for the guy thing. I placed the first one on the floor, which was one of those fountain-types shaped like a pyramid. When it went off in the confined space we had to leg it when we were engulfed in choking smoke. Mum was washing the pots at the time upstairs and witnessed a massive gulf of thick white smoke bellowing from the cellar grate. I doubt she was even really surprised any more.

Over the years our fascination with “man’s red fire” slowly dwindled like the embers of a right good bonfire. Apart from an incident where my brother was reported to the police for lighting small fires on wasteland I can’t remember any other problems. We have to count ourselves lucky nothing serious happened – apart from burning down a house and a kitchen of course.